How to Teach Challenging Soccer Shots

Do you know what limits your soccer players’ potential on the field more than almost anything else?

It’s not natural talent or practice time. No, it’s the diversity of the shots they take. Most amateur soccer players–regardless of age–make the same soccer shot on the pitch. The standard shot is pragmatic to a degree, but it also limits every player's effectiveness in other scenarios.

Every player needs other shots to work against versatile players or stressful conditions.

To teach challenging soccer shots in a way that impacts their game, you need players who also mastered the basics: dribbling and passing.

There are seven shots in soccer that every intermediate to advanced player needs to know but not necessarily use at every turn. We’ll show you how to teach challenging soccer shots including the outside shot, bending shot, and toe shot.

Master the Basics Before Anything Else

Players aren’t ready for challenging shots if they don’t have proper kicking, dribbling, and passing technique.

You’ll see very quickly that the advanced or challenging soccer shots require additional motor control, depth perception, and ball-handling skills. Without these as a foundation, the player will struggle to achieve the correct technique for the advanced skills.

The technique, as you’ll see, is where the power and performance come from. Without it, the player risks flopping on the field or even injury in some cases.

Seven Soccer Shots That Every Player Needs on the Field

Image by bottomlayercz0 from Pixabay

Every player needs to learn and master these seven shots:

Learning each of these essential shots is an integral part of understanding how to teach challenging soccer shots. Without using the first few moves on the list as foundational skills, your players will struggle to conceive of and use more complicated shots like the bending shot.

For example, a perfect standard shot sets up a player to learn most other shots, and it’s the most useful shot across the board. The straight and inside shot come in second, and mastering these requires practice.

We’re going to show you how to teach the more challenging soccer shots: the outside, bending, and toe shot. These aren’t used as often because they challenge the player, and the challenge they present means players often fail to perform them well enough to be worth the risk.

How to Teach an Outside Shot

In theory, an outside shot requires the player to slice the ball using the outside of their foot (either left or right). But the reason the technique is so tricky is that the player won’t use the “outside” of their foot.

Before teaching an advanced shot like the outside shot, be sure that the player knows how to complete a powerful kick competently. Even if they mastered it previously, drill some power kicks before moving into the tutorial.

Reaching the position requires the player to plant their foot a step behind and to the side of the ball. The foot position allows the player to swing across their body but only slightly.

Players complete the shot with a slight wing across the body. They should land on their shooting foot.

The outside shot should curve the ball. If it doesn’t work, then player only hits the middle of the ball as they would in a straight shot. Making contact with the outside middle part is vital.

If power is an issue, the player likely makes contact too close to the outside of their foot rather than the middle of their laces.

How to Practice the Outside Shot

Once the player has each part of the movement down, it’s time for drills.

Help the player practice his or her technique by first working without the ball.

Only add the soccer ball in when the player uses the right form without it. Once you throw the ball into the mix, encourage the player to work slowly and rely on the power from the inertia rather than shooting specifically for speed.

Power improves with technique not with force, so reinforce the principle when needed.

How to Teach a Bending Shot

Mastering the bending shot makes players more agile on the field, and it can be used not just while shooting but works well with crossing and passing as well.

The bend works best when crossing and passing because it’s a particularly risky move for players headed toward the goal.

You’ll need more equipment to teach this shot including four cones and a large object like a garbage can.

The shot begins the behind ball. Line the player up five steps directly behind it. Then, they’ll place their foot two inches behind the ball and slightly off to the side.

You’ll need an advanced player here because they’ll require good control of their body for the next step. With their feet in position, they lock their ankle and move to expose the outside of the foot. The player reaches the correct position when their toe points up.

The follow through on the bending show is high, and the foot needs to curl to give the ball an upward arc in addition to the bend.

Finally, note that the curve you desire happens on the ground after landing. It should have a decent spin in the air, but it should make the most movement on the field after landing. The ground movement is what makes it better for crossing or passing. If it spins in the air, it sends the opponents in one direction, but it then deceives them and curves back to the receiving team member.

If the player feels uncomfortable with the position, be sure they are a few inches from the ball. They need to have the latitude to kick the ball comfortably.

How to Practice the Bending Shot

Set up the target with four cones to create a square. You’ll cross the ball into the box using the technique. Drill this for five to ten minutes.

Later drills can feature the trash can. Players use the technique to hit the trash can, which has less surface area than the cones. The trash can provides better passing practice and improves the accuracy of the player’s shot. Take it up a notch by having the player dribble before taking the shot to create a scenario that mirrors a game.

How to Teach the Toe Shot

Players aren’t supposed to kick with their toes. They had it drilled into their heads from their first day of practice. But the toe shot, when used the right way, can save a game.

The toe shot allows you to get the ball in the goal even as your opponent’s defenders close in. It doesn’t have power, and it’s hardly accurate, but it does take the pressure off when you’re out of options.

To teach a toe shot, have the player stick their leg out and use their toe to kick the ball. The trick to the toe shot is not to use the momentum from drawing your leg back but to manage as best you can just with the foot.

How to Practice the Toe Shot

Don’t dedicate much practice time to the toe shot because it’s a ‘last resort’ kick and it fosters poor habits in younger players.

Teach and practice it among top scorers for the best effect. 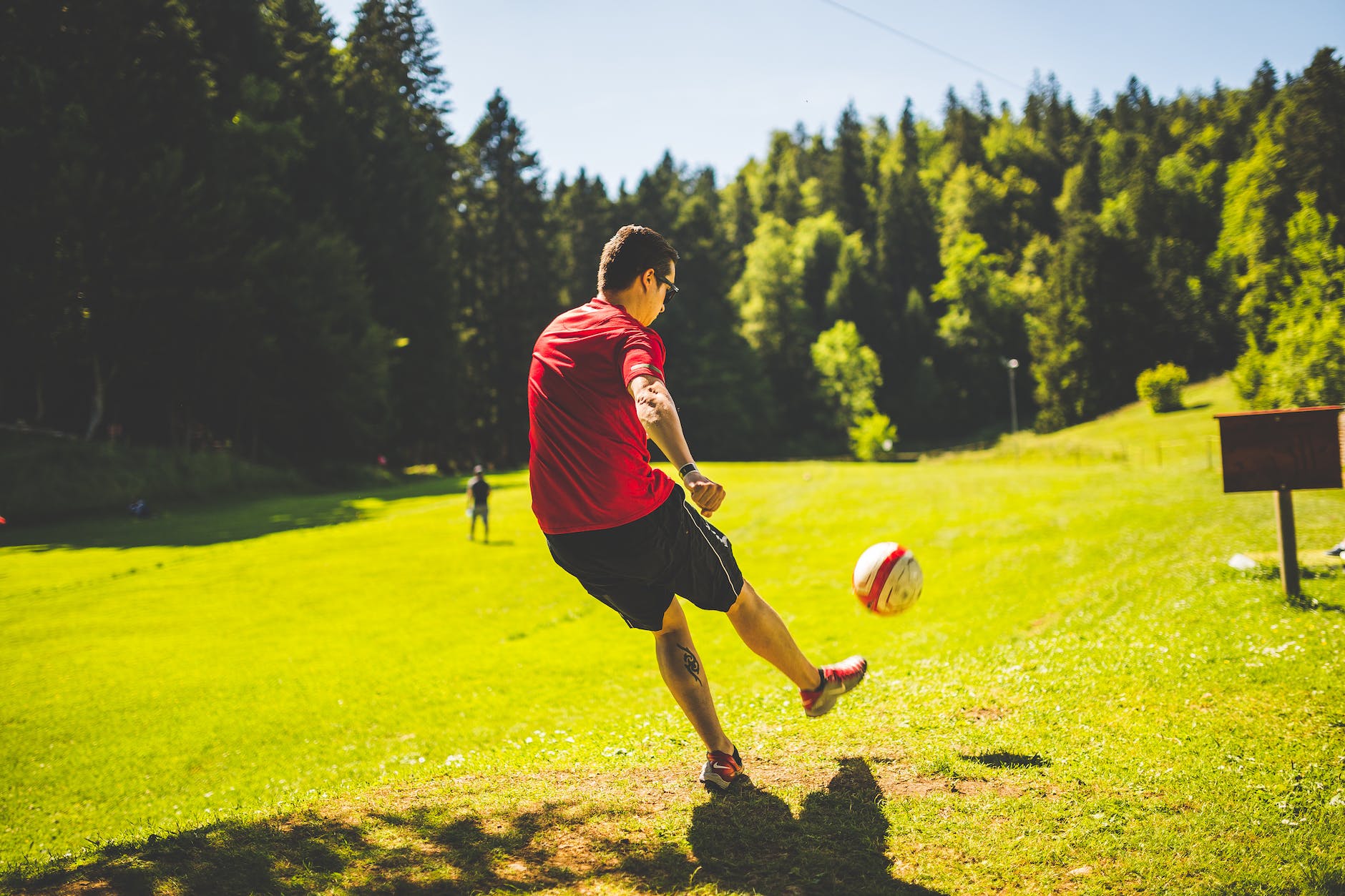 The trick to learning how to teach challenging soccer shots successfully is to always start with the basics. Foundational skills ensure that all players build their skills in a useful way and make sure they’re physically ready to level up.

Do you have any tips for teaching advanced skills? Share them in the comments below.